Benjamin "Benny" Claude Sherwood (born 1996) is the unenchanted geeky best friend to Tom Clarke and son of Richard and Tricia Sherwood. After discovering that Tom was a wizard, he decided to tag along when being beamed up into space onto the Zarantulus. He soon became a part of the wizard team, fighting against the Nekross race by bringing a scientific opinion into the battle. Benny describes himself as the "equal and opposite" of Tom, including his sexuality when he comes out as gay at the end of Series 2.

Benny was born sometime in 1996 to Richard and Tricia Sherwood.

Benny attended King's Park High, where he knew Tom Clarke, Katie Lord and Quinn Christopher. He was mocked for being a geek.

While on a school trip to Burnt Hill Stone Circle, Benny found a magical ring which Tom recognised to be of magical origin. When Benny took the ring back to school to examine, he was attacked by Miss Webster who has been taken over by the Voolox sent by the Nekross. While running from the alien, he bumped into Tom who used magic to defend from the Voolox blast. When Ursula Crowe arrived to see what had happened, she and Tom were captured by Lexi. After helping Tom rescue Ursula, Benny agreed to help Tom in his fight against the Nekross. Dawn of the Nekross From then on he has since helped Tom defeat the threats of the Nekross on many occasions.

Benny gets a invitation to study at the Massachusetts Institute of Technology in America, much to Tom's dismay as they will be separated though Benny says he will come back during the holidays. The two quarrel but work together to stop Jathro's Quantum Light project from causing Earth's population to fade away. After sending the Quantum Light back into space, Benny arrives at the Clarke house to bid farewell to Tom who takes him to the Chamber of Crowe where Randal Moon gives him his moonstone as a goodbye present. Tom reassures Benny that he can deal with the Nekross himself whilst Benny is away and gives his friend a goodbye hug. Benny breaks down in tears and walks away into the distance.The Quantum Effect

He tends to refer to everything as science, because he believes that everything is formed from science, even seeing magic as just another form of energy. He is very interested in the subject, even to the point where he does experiments after school hours on a magical ring that he and Tom discovered in the gathering of stones.

Benny has revealed that, due to being Tom's equal and opposite, he will go on a date eventually, but not with a girl, revealing that he is gay. All Out War! Tom suggests he will get his date at MIT. The Quantum Effect

Benny is a genius and extremely valuable ally to the Wizards, because he is quite advanced in the scientific area. His skills in technology prove to be vital in defeating the Nekross, earning Benny recognition in the Wizard world. His home-made weapons against the Nekross include the Electromagnetic Pulse Cannon and the Dazzle Cannon. 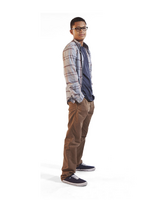 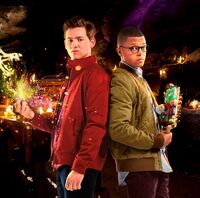