Jathro Pel Stannic Paha Paha Hop Kooth - formerly known as Technician Jathro 15 of Subsection Alpha Grex 9 - was the son of Chancellor Kooth and a Nekross technician. Not being of royal blood, Jathro had red skin instead of yellow and did not possess an eye and mouth on his antennae.

Jathro aided the Nekross's plan with making clones of Helen Clarke to have an endless supply of Magic but the plan was foiled by Helen's son Tom, his father Michael, grandmother Ursula Crowe, his friend Benny Sherwood and one of the clones. The Last Day

He later helped lure 100 wizards to Channel Hex studios to extract the magic out of them. He catches Benny in the control room of the studio but Benny is able to distract him in order to steal a Nekross glove to set the wizards free. He is last seen leaving the flight deck of The Zarantulus as Chloe Martin's magic is extracted. 100 Wizards

Jathro is then seen with an now rearranged Varg who tries to act normal. He is then seen activating the Extractor on Lexi's orders, draining the magic out of and killing Squiggley the Hobbledehoy who had rearranged Varg. He then is seen telling the King and Lexi that there is not magic in Varg anymore (due to another Hobbledehoy named Stickley reversing the enchantment Squiggley cast). He is last seen sending a message to an anonymous recipient on Nekron saying that Varg and Lexi are fighting which he believes will greatly benefit a 'plan' Jathro is in on. Vice Versa

The recipient that Jathro is planning with is revealed to be Chancellor Kooth, a Nekross who is running Nekron whilst the royal family are searching for magic. Kooth says that the King must never know of their plan. The Curse of Crowe

Jathro was seen plotting with Kooth before assisting the Nekross in taking control of the Moon, causing an endless lunar eclipse on Earth. Endless Night

When Kooth arrives on the Zarantulus, she proposes the Contest of Devourment in which Varg and Lexi must compete to capture Tom. This is a distraction to allow Jathro to steal the Catromeister Quatrozeen, giving Kooth control of an armada of Nekross ships. When Kooth contacts the Zarantulus to boast that she will overthrow the royals, Jathro reveals that he is responsible for the theft of the Catromeister Quatrozeen and that he is Kooth's son.

After a huge battle with the Zarantulus, Jathro's army surroundeds Earth. When Tom takes the salute and drinks raw magic, his powers become immense. Jathro and his ships are swiped away but not before his mother is eaten alive by the Nekross King. All Out War!

Jathro is able to survive by using an escape pod and landed on Earth and used a form filter to disguise himself as an astrophysicist named Adam Wright and went to the Brook Mill radio telescope and put the scientists there in a trance. Months later, he tricked Benny into helping him get the Quantum Light in order to equal his genius and bring Earth to its knees as revenge for being bullied and treated like a fool all his life. He plans to use it to create a superstorm to which Benny says that he thought he hated bullies but Jathro tells him he just hates being bullied. He then sees Varg along with Lyzera and panics thinking Varg will obliterate him and flees taking the flash drives containing codes with him but Tom, Benny and Ursula manage to catch up with him. He then learns that the effect Quantum Light has on unenchanteds causes them to disappear after noticing Benny appearing and disappearing. Benny says that he can send the Quantum Light back into space but needs to get back into the control room but his body is very weak so Ursula casts an Enchantment of Essence which puts Benny into Tom's body whilst Jathro watches on. Jathro then becomes Adam Wright again and goes to Varg and Lyzera to get the telescope back in exchange for Tom and leads them out of the control room and says that they should have left Michael in the control room after seeing him collapse due to the effects of the Quantum Light but Lyzera says kindness is not a trait in the Nekross. However Jathro's cover is blown when Varg notices his form filter on his wrist and prepares to kill him but Jathro claims that he was brought into this by Tom and says he will lead them to him. He keeps to his word and brings them to Tom Clarke in the control room but Benny after releasing the Quantum Light back into space uses a tracker bug he reprogrammed for Nekross DNA to sent Jathro along with Varg, Lyzera and the other Nekross back to the Zarantulus. Back on the Zarantulus, Varg prepares to deal with Jathro for his betrayal where Lyzera suggest making him jester to her pet bird Eelix. The Quantum Effect

Varg having noticed that the Magic stored in the Zarantulus is disappearing, he assigns Jathro to find out why. Jathro learns that Lyzera is a sorceress and tells this to Varg who accuses him of lying and brings him to Lyzera who says that Jathro is mad and Varg has him taken away by the guards. Jathro later makes a clone of The Key of Bones made from the piece from the real one Lyzera took. Lyzera then tells Jathro to feed Eelix but he tells her that there are no beatroo bugs left to which Lyzera kills Jathro by turning him into betroo bugs as punishment for betraying her earlier and then feeds them to Eelix. The Key of Bones

Jathro is a highly skilled technician and engineer. Although initially appearing loyal to the Nekross King, he is revealed to be duplicitous and conniving. He is also quite nerdy and was easily distracted by Benny Sherwood's Electromagnetic Pulse Cannon. 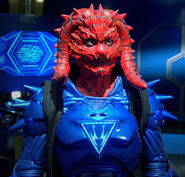 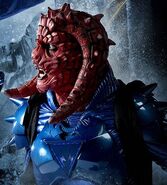 Jathro plots with his mother Kooth