Lady Lyzera is the first daughter of the House of Thraal-Nekron, Granddaughter of Sandar the Slayer, Last Blood of the People of the Ringed Moon, the wife of Varg, the Queen and sorceress of the Nekross. From her Sorceress Zone, a Magical realm hidden aboard the Zarantulus, Lyzera schemes to harvest Magic for herself and one day use it to conquer the entire Universe.

Lyzera got married to Varg in order to save the Royal House of Nekron after it was discovered that Varg's father, the Nekross King keeping magic for himself and only giving his people scraps. She travels with Varg and her pet bird Eelix on the Zarantulus to extract the magic of Earth and for Varg to have vengence on Tom Clarke for turning his sister Lexi into a human (which he did to save her from Zanti Scale Contamination). Unknown to Varg, Lyzera is a sorceress who wishes to take the magic for herself and rule the universe. There is much evidence to support the fact that she does not love Varg, only the idea of taking over the world and Eelix, who knows of her plan to take over the universe. The Secret of Room 12

She is impressed by Varg's Tracker Bugs that can track wizards and land on them in order to teleport them to the Zarantulus for extraction. The bugs are successful at capturing a wizard named Eva Starling who convinces Lyzera and Varg to spare her saying that she can lead them to the Line of Twilight which has magic. When Varg and the guards are trying to get a wizard into the Extractor, Lyzera takes a vail of magic and places it in her Sorceress Zone. She along Varg and some other Nekross guards arrive on Earth at the Brook Mill radio telescope where they hold Michael Clarke hostage and plan to use the Quantum Light to make unenchanted disappear leaving only wizards left. Whilst there an astrophysicist named Adam Wright arrives to them in the control room and offers to give them Tom in exchange for the telescope. However after they leave the control room Lyzera and Varg see Adam wearing a form filter and discover that he is in fact Jathro a Nekross who along with his mother Chancellor Kooth tried to overthrow the Royal Family. Varg prepares to kill him but Jathro convinces him to spare him and leads him and Lyzera back to the control room where Tom (with Benny inside his body) is trying to send the Quantum Light back into space. Tom is able to put Benny back in his own body and Benny uses his laptop to send the Quantum Light back into space just as Lyzera and the guards arrive and take him and Ursula into the control room. When they get there, Benny uses a reprogrammed tracker bug to send Lyzera, Varg, Jathro and the guards back to the Zarantulus. After arriving there, Jathro is brought to Lyzera and Varg who wish to punish him for his earlier betrayal which Lyzera suggests making him a jester to Eelix. The Quantum Effect

On the Zarantulus, Lyzera sees Varg looking out of one of the ships widows onto Earth thinking about Lexi. Lyzera then magically hypnotises Varg into going off to rest and after he leaves, she talks to herself whilst looking out the window at Earth saying that with it's magic, the universe will be hers. She later disguises herself as a human journalist named Laura Piper (it is unknown whether she used a Form filter to do this or magic) and took some of Simeon Swann's blood before returning to the Zarantulus where a now awake Varg asks her where she was to which Lyzera replies that she was doing research. The Daughters of Stone

When in her Sorceress Zone, Lyzera uses Simeon's blood to communicate with him in his dreams and is told by him about Warlock, the leader of the wraith lords who wishes to bring dark Magic and chaos into the world and also tells her about a hidden talisman called The Key of Bones which can unlock or lock The Line of Twilight unaware that Jathro is watching her do it. Later Varg brings Jathro (who had revealed what he saw to him) to Lyzera claiming that Jathro was making up lies about her being a sorceress to which Lyzera agrees saying that Jathro is mad. After Jathro is taken away by the guards, Lyzera tells Varg about The Key of Bones and also shows him the vial containing Simeon's blood which they use to track Simeon along with Tom and Michael in Shanghai where The Key of Bones is hidden and demand them to take them to it and they go through a portal that takes them to a castle. When there the Quest Master arrives and tells the group that in order to get the Key of Bones they must play the quest. After overhearing Simeon's idea to dispose of them, Lyzera and Varg trap, him along with Tom and Michael before going to look for the Key of Bones themselves. But there find themselves stuck in an enchanted passageway but they hear Simeon (who along with Tom and Michael was freed by Ursula) calling out the names of the nine wizards that made the Line of Twilight and follow them into a room with small boxes in it. When inside the Quest Master tells the group that two of them will take part in The Challege of Choices, which are Lyzera and Tom. Tom is successful in finding the box containing the Key of Bones but Lyzera destroys it before she and Varg are banished by the Quest Master but Lyzera has a piece of the key which she uses to make a clone key. She then in front of Varg turns Jathro into beetroo bugs as punishment for betraying her before taking Varg to her Sorceress Zone and tells him that Magic and Science will now be allies in their battle against the wizards before using the cloned Key of Bones to summon Warlock. The Key of Bones

Lyzera feeds Eelix the rest of the beetroo bugs and tells Varg that magic is a strength to be embraced not just an energy to be consumed before taking him to the Sorceress Zone where she tells him that the Key of Bones can unlock not only the Neverside but a resource of magic that spreads the entire cosmos. She also tells him that though the Nekross fed on the magic of planets across the entire universe, each had it's own Neverside which are still around and all connected making the Neververse. She then calls on Warlock and tells him he have the Dayside to with as he pleases whilst the Neverside shall be hers to which he accepts. Warlock tells Lyzera to take the Key of Bones to the Doorway of Long Shadows to meet with him. However, Lyzera tells Varg that when Warlock comes through the Doorway of Long Shadows, they will take him and extract his and all the wraith lord's magic the plunder the Neverside and all that lies beyond. She later walks in on Varg revealing her plan to Tom and an Unenchanted girl named Jazz James and orders the Nekross Guards to seize Varg but fails to capture Tom and Jazz as they teleport back to Earth. She also teleports to Earth at Blackhawk Abbey and orders the guards to find Tom and Jazz while she along with Varg go to meet Warlock. She and Varg eventually reach the room in the abbey where the doorway is and find Tom, Jazz and Randal Moon (in human form) there too before using magic to make the Monks there vanish and then summons Warlock who tells her to give him the Key of Bones to set him free into the Dayside which she does before placing the Key of Bones onto Warlock which turns into a hand and plans to have twilight fall across the Heavens and Earth. Warlock thanks Lyzera for returning his hand but when she and Varg try to make him surrender, he uses his wraith magic to knock them to the ground. Lyzera manages to get up and sees Tom with Jazz and Varg's able to put Warlock back through the doorway and destroy it but Warlock reveals that due to Randal leaving the Chamber of Crowe, he and the wraith lords will be able to get to the Dayside through there. She and Varg then take Tom, Jazz and Randal to the Zarantulus and put them in a prison cell say with Magic and Science the Nekross are victorious. After being told by Varg that Tom and the others have escaped, Lyzera tells him that Tom is of no consequence saying that once Warlock breaks through from the Neverside they're harvest of magic will make him look a tadpole amount whales. But Varg points out that Tom defeated a Nekross battle armada with the sweep of his hand to which Lyzera says he did it with magic intended to feed their people which is a crime is is yet to pay. Lyzera and Varg goes through the Zarantulus to search for the trio and decide to go to the teleport to wait there where they will find Tom and suck the magic from his bones. When waiting at the teleport, Lyzera learns that the trio are in her Sorceress Zone and confronts them there and reveals to Tom of what Varg told her about how he used extracted Magic to defeat the Nekross battle armada and prepares to turn Jazz into beetroo bugs for Eelix but is told by Tom to leave her alone. After being told by Eelix that Tom has one spell left she has him decide whether to save Jazz or the world. When Tom refuses to choose, Lyzera tells him he is finished and so is his world but Tom then takes the Magic stored in Lyzera's orb and uses it to take him, Jazz and Randal back to Earth, destroying the orb in the process. Varg hearing the noise, comes into the Sorceress Zone and finds Lyzera kneeling next to the remains of her orb angrily calling out Tom. Twilight Falls

Lyzera has violet skin with brown eyes, two antenna with an eye on the right one and a mouth on the left covered in purple strands. She wears a purple and gold dress. 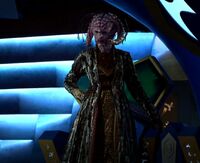 lyzera in the sorceress zone 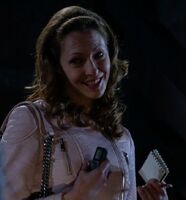 lyzera in her human disguise