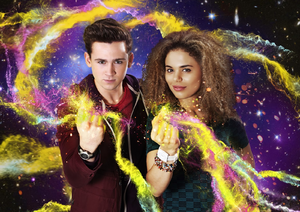 Magic is a form of energy, according to Benny Sherwood, and later Varg, that is concealed inside individual life forms that are able to harness and use it. This energy is capable of enabling the individual telekinetic powers, but it is currently unknown if this contributes to the "Three spells a day" rule for wizards. (Note: Magical creatures, for example, like Randal Moon are not limited to three spells a day).

Magic often appears as a dazzling blast of coloured energy. In Series 1 and 2 magic has been shown to be in the colours of the rainbow (Red, orange, yellow, green, blue, indigo, violet) with a few lighting differences between each wizard (e.g. Benny Jr. had a a lighter colour scheme for his magic, along with a darker blue, while Ursula's magic had a darker colour scheme). However, in Series 3, all magic changed to purple and orange, with the exception of Lady Lyzera, whose magic was different shades of purple/pink, and sometimes with a few hexagonal symbols floating around.