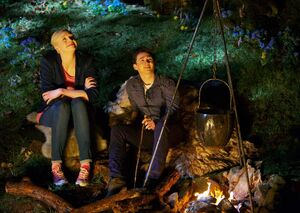 The Neverside is a magical dimension where magical creatures exist and the original home of Wizardkind. Centuries ago there was a war between Wizards and the creatures of the Neverside, these are known as the Neverside Wars. Within the Neverside there are many realms and it runs parallel to the human world however, time works differently and a few hours on Earth is a few decades in the Neverside. Wizards originally came from the Neverside until the Nekross came and took the magic of most wizards. The remaining wizards still with magic escaped into hiding on Earth where they blended in with all of the other humans for centuries until the Nekross found the wizards once again.

The Neverside is a forest like world which is very dimly light place with no direct sunlight and is slightly misty, it is also mentioned as having mountains and forests. It is unknown how vast it is but it is presumably the same size of Earth.