Rebel Magic is the third story of the first series of Wizards vs Aliens.

When Tom meets another wizard called Jackson Hawke, he can’t resist dabbling in dangerous magic. Benny tries to warn him, to no avail, but all three lads are unaware of the Nekross getting closer and closer – and this time, alien Prince Varg is determined to make it personal.

Tom and Jackson take the fight to the Nekross, but their forbidden Grim Magic is taking its toll on Tom. Only Benny can help his best friend – but he’s been enchanted. Michael and Ursula fight to reach Tom in time, but dawn is rising, and the final confrontation is about to begin. . . 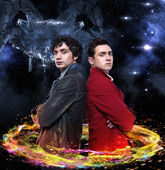 Wizards vs Aliens- Rebel Magic - Part One (Next Time)