Series 3 of Wizards vs Aliens began airing on the 27th October 2014 and ended on the 25th November 2014. The series consisted of 10 episodes (5 stories) making it the shortest series to date. It is the final series of the show after it was placed on hiatus by the BBC due to its expensive cost. To accompany this series, two mini-series were released on the CBBC website, Varg's Vidcast and Randal Moon's Creatures of the Neverside.

The Nekross are back - but this time their plans threaten to release an ancient evil that could overwhelm Wizard and Alien alike. It's up to Tom, Benny and friends old and new to stop them.

Randal Moon's Creatures of the Neverside 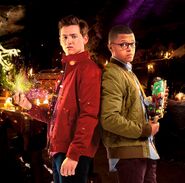