Stephanie Gaunt was an Unenchanted woman who owned a high-tech company called Gaunt Technologies. An incredibly rich and successful businesswoman, Gaunt wanted to use Magic to rule the universe.

Gaunt has her employee Adams capture Tom Clarke and Lexi (in her human form Lucy) and when she discovered that Lexi was an alien, she planned to use Tom's magic and Lexi's Nekross technology to rule the universe. Stephanie then tried to get the two to teleport the Crown Jewels to her but they tricked her and escaped. Varg, at the same time, had tricked her guards by pretending to be Stephanie herself. It is seen at the end of the episode that Lexi took Stephanie with her back to The Zarantulus. There she meets The Nekross King and tries to convince him to ally with her but this offer is refused and she is fed to the Skorpulus. Friend or Foe

Gaunt was extremely scheming and greedy and only thought about herself. It was her lust for domination which motivated her to capture Tom Clarke. Even before she died, she tried to gain power by attempting to win over the Nekross King 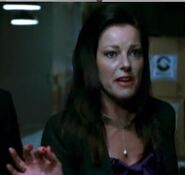 Stephanie being impersonated by Varg in order to trick the guards.
Community content is available under CC-BY-SA unless otherwise noted.
Advertisement