The Secret of Room 12

The Secret of Room 12 is the first story of the third series of Wizards vs Aliens. It first aired as an hour long episode on 27th October 2014, but has since been released commercially, as well in repeat broadcasts, in the show's usual format of two 28 minute episodes.

Tom and Benny think that with the Nekross gone, life is going to get a whole lot easier.

But when students and teachers at King's Park High start acting strangely, Tom and Benny fear their enemies have returned and soon suspect alien activity centred on the mysterious Room 12.

Time is running out for Tom and the Earth! The Nekross are back, and with new alien enemy the Prospector planning to extract the Earth's core, Tom must strike a deal with Varg to stop him destroying the planet - and the last magic in the Universe!

The episode starts off with Tom entering the Chamber of Crowe and explaining how Wizards have always protected the Earth, we see snippets of Series 1 and Series 2. The next day, a Banshee is accidentally let out the Chamber when Randal Moon and Ursula are cleaning it, thankfully, Tom manages to trap it in a dustbin. At King's Park, summer holidays are over and Benny and Tom reunite, Benny had been away at MIT over the summer. In class, Quinn Christopher is naughty and Mr. Fisher sends him down to Room 12. But when Quinn opens the door to Room 12, he is grabbed by a mystery person saying 'You will be recruited'. At recess, Quinn is back and convinces Tom and Katie Lord to come with him to see 'something', but meanwhile, Benny's computer discovers that the Nekross are back for Magic, so he runs to tell Tom, who comes with him, leaving Katie behind to see this 'something'. After Tom warns Ursula about them, Katie returns, Tom and Benny notices she is acting strangely, then they discover she has been 'recruited' and tries to hypnotise them, Benny tells Tom to use magic to stop her, but to his confusion, Tom initially refuses, eventfully he has to cast a spell to stop Katie. But then they run into the hallway of the school, they discover that all the teachers and students have also been hypnotized, including Mr Fisher and Quinn. After Tom and Benny hide from them in the music room, Benny questions Tom about why he didn't want to cast a spell and Tom is forced to admit that since he drank the extracted magic on the Zarantulus, he's feared his magic. Tom and Benny sneak out and find Room 12, they look inside, and they find it has been turned into a mining factory, using the students and teachers' brains to power, Tom's dad, Michael is also among them. They meet The Prospector, who reveals he is using brain power to drill into Earth's core, this of course would destroy the Earth. As they are about to be recruited, the Zarantulus teleports Tom up to it, and there he meets the now Regent king Varg and his wife Lyzera.

Varg plans to blow up the school to stop the Prospector from destroying the last source of Magic in the universe, however Tom warns him that Lexi might be down there, upon hearing this, Varg withdraws, still missing and worrying about his sister greatly. Tom agrees to go to Earth and stop the Prospector, but Varg, still angry at Tom for turning his sister human, straps a bomb to Tom's wrist and gives him half an hour before the bomb goes off and destroys him, Tom is teleported back to the school. Meanwhile, Benny is back in the Chamber, after running away from the Prospector, he explains what is happening to Ursula and Randal Moon, Ursula and Benny get in Ursula's car and start driving to the school. Back there, Tom goes back into Room 12, where the prospector dares him to send him back to where he came from, but Tom, still being haunted by the memory of drinking the extracted magic, cannot bring himself to do this, instead, he breaks some of the pipes to distract the Prospector, he runs out the room, but as soon as he knows the prospector isn't following him, he sits down on the floor, disappointed in himself for not casting a spell. Benny and Ursula arrive, Tom claims he is not a 'warrior wizard' after being too afraid to cast a spell. Ursula comforts him and they devise a plan to stop the Prospector. Inside Ursula casts a spell, which makes the Prospector fall in love with her, who runs off and casts a spell to create a mirror image of herself. The Prospector runs after the image, while Benny, Tom and the original Ursula shut down the mining factory, but, with the bomb Varg strapped to Tom's wrist about to go off, Ursula creates a passing charm which makes her, Michael and all the students and teacher safely outside. Back inside, Tom turns himself into a mouse, losing all his clothes and the bomb itself. Benny picks up the now mouse Tom outside, just in time, as the bomb goes off soon after. Michael and the students and teachers regain consciousness and Ursula tells them all it was a fire alarm. The Prospector is teleported back to his planet, for failing to drill into Earth's core. After explaining things to Michael on the way home, they all go into the chamber and Moon turns Tom back into a human, (he is naked unfortunately for him). Back on the Zarantulus, out of view of Varg, Lyzera reveals herself to be a Nekross sorceress and her evil plans to rule the universe. 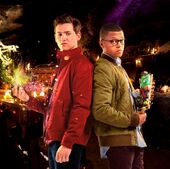 Wizards vs Aliens- The Secret Room of 12 -Part Two- (Next Time)
Community content is available under CC-BY-SA unless otherwise noted.
Advertisement