Controlled by the Nekross, Tracker Bots are able to fly at great speed and chase their targets by eye. A more powerful version of the Tracker Bot is the Blaster Bot while smaller robots named Tracker Bugs have been developed.

Three Tracker Bots, operated by Zeta-Graal, were used by the Nekross to chase Tom Clarke, Benny Sherwood, Meg, Emma and Meg and Emma's mother. They were however malfunctioned by Benny's Electromagnetic Pulse Cannon. This resulted in Zeta-Graal being fed to the Skorpulus. 100 Wizards

When Jathro detected powerful magic coming from Randal Moon's location, Varg told him there was no need to send down the Tracker Bots, teleporting down to deal with the matter himself. The Cave of Menla-Gto

A group of Tracker Bots assisted Varg and some Nekross Guards in launching the assault on Tom's house. All Out War! 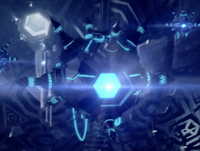